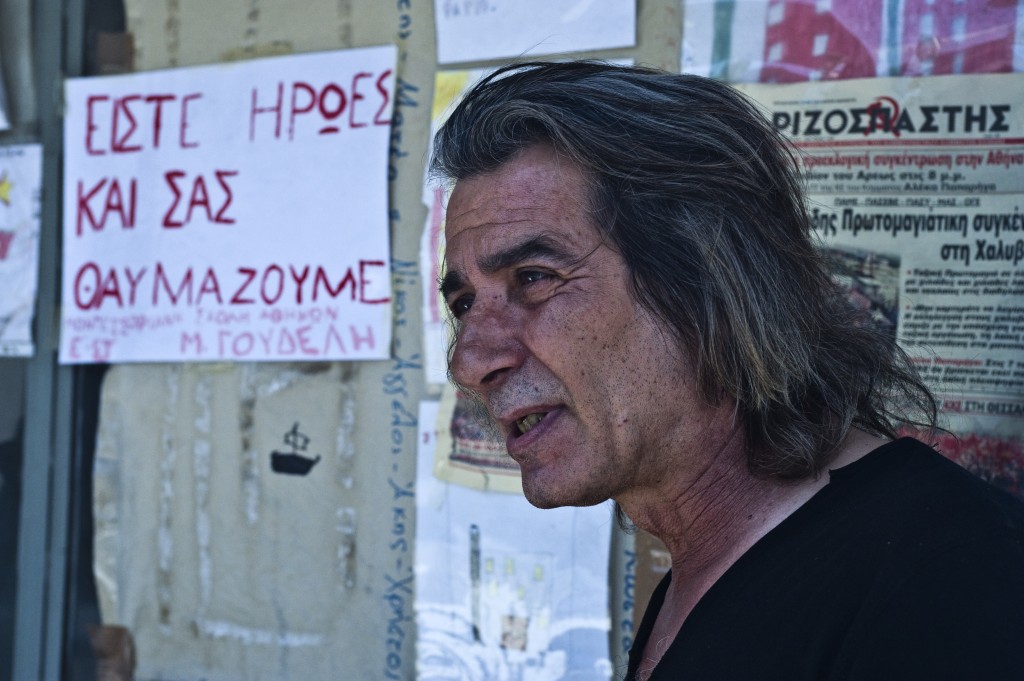 Last week I was pointed upon the steelworkers in Athens who are on a strike now for 7 months. They fight against the changing climate and especially against the opportunity their boss sees in this situation. Since the crisis there were 120 people fired from the factory were 500 men worked on hard labour. But now the people who stay even have get cut backs around 50%, so were they did earn 1000 now they should be satisfied with around 500 euros a month.

In the meantime this strike has been a battle but with some success. They managed to cancel the cut backs through the legal system. Which is a great result but sure enough also fair, while with 500 euros you cannot pay for your house, your car, transportation and the food. Let alone sending the kids to afterschool while the normal school system is not sufficient enough. This break is a big achievement but not enough for the workers, they also want their fired colleagues back.

You can wonder if that would really help, while there is probably less work to do so how can this be possible. After questioning this I got an unexpected answer. Business wasn’t bad at all, and actually they were working more and more the past few years. He noticed this of course because he was standing at the production line. The production since 2007 till the moment we went on strike increased with 40%. But the management did some bookkeeping where there profits wouldn’t look so big. Like buying a yacht in the company’s name and spending money on security all this would make the earnings of the company go down and thus you would not have to pay as much taxes as you should. All together you can say that more over where there are people in charge is seems more common to them to commit fraud. Which goes at the cost of people who don’t take the initiative of setting up a business.

The day before I visited the factory they workers became some good news, there strike was declared legal. This breakthrough means they wont have to expect the police cleaning up the place and forcing them anyway to work. This is a major breakthrough according to the President of the Workers Union of the factory (George Sifonios); we put up an honest and fair fight, this time the judge ruled in our favour. But we must not forget that we have hard labour and on average 7 people die during the work at the factory. So the conditions are so harsh that it is unjustified to have major cutbacks even more while the management is still taking the fruit of the company.

Besides all these issue’s George tells me that the company got a big sum of money to invest in improvements for the factory from the European Union. This happens not only here but in more companies around Greece, but while the money is send with the intend of improving or investing into the company. But more over it happens that the money will disappear into the pockets of the directors. The steel factory became money to invest into a cleaner way of producing our products. We have to make our factories cleaner and there is nothing wrong with this, unless the money is not used for its purpose.

From the start of the strike they workers formed a committee, which in its order informs the public about there fight. They organize a lot of happenings, like strikes and gatherings, to inform them about their fight. Despite this it seems that the mass media doesn’t want to sell this story, probably because of the fear that it will happen at more places. But they wont give up until the end although George admits that they are getting tired. When you live of the generosity of other people giving you money and food to survive is less then ideal. And especially since they started at 31 of October 2011, now they can feel the pain in there families.

For me my heart goes out to these people, I can see that they suffer. Always when families get hit by a fired family member or due to strikes don’t become an income it wil reflect in the end onto the next generation. The psychological effect is more severe then most people would understand and even when the workers would go back to work you will have the same management above you. The factory was doing right since they had an increase in production, that is the thing Greece needs, but the salaries should at worse be frozen since it is a crisis. But never should the crisis be an excuse for the company to treat their staff bad, your company is as good as how well you treat your own kind! Lets hope the workers can find the solutions which is most satisfying to them and there family’s and that they would be able to support them selves again and don’t have to live with there family’s at there parents places.

(Portrait of George, president of the Workers Union of the steel factory)