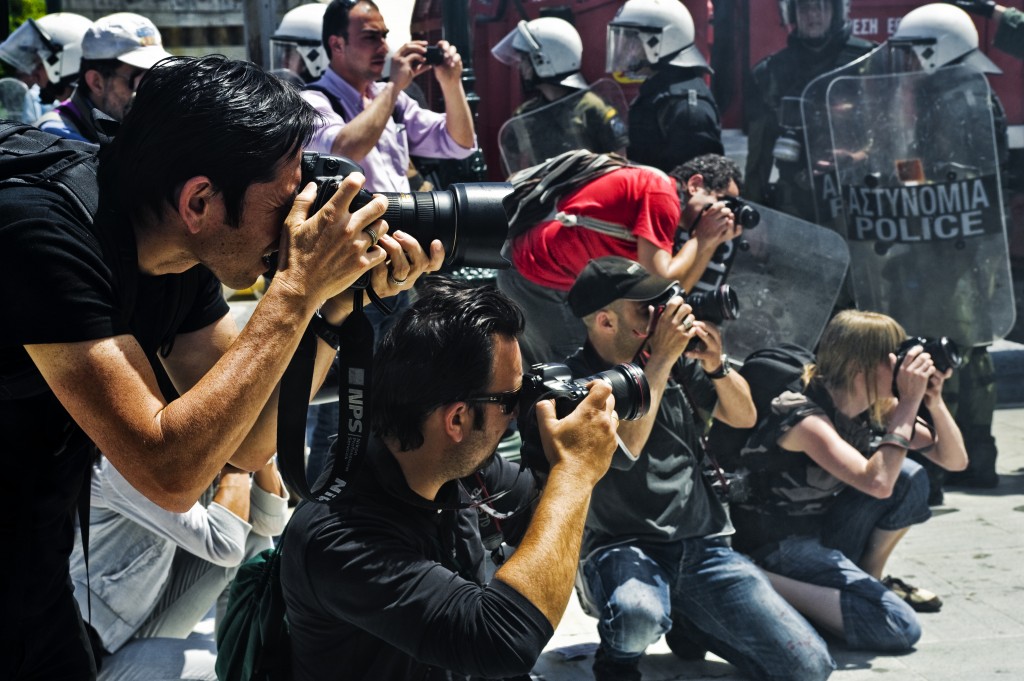 Last Tuesday there was a small demonstration organized, and of course i had to visit it. The interesting part to see is the ratio of press versus citizens, and this day there was a nice balance. Although when on a normal day in Athens you hardly see any photographers, like the ones on the photograph. So what you could say is that these are the journalistic photographers, where they are send out to make pictures for their bosses. Interesting enough for me is the fact what is considered news in these circumstances, for instance this photograph.

There was a small fire at Syntagma square (main square where the government is hosted). The fire started at a pop up box office for some political party. Off course it was on fire because the public dislike their government and that is not without any reason. The moment of the detection of the fire the police force were told to protect the fireman while doing their jobs. But because of the policeman, these vultures of the press, the photographers especially in this case went to the fire. There was actually nothing going on, but just the effect of the firing could bring another perspective to the day of the demonstration. The negative perspective to which the media is so addicted. Even though the demonstrations were quit and peaceful, this image will rule the newspaper because they are designed to frightening the public.

The question is what is the news of today aim to inform us about? Is it really in the best interest for us to be overloaded with bad news? And how accurate is this news?

While being in Athens I also follow the news back home, there was this topic about under age drinking. Now the record for coma drinking is for this 11 year old boy and the media sketched a very negative imagine about the Dutch drinking habits. A couple of days later, the same news channel said that actually the drinking habits under the younger people are getting less. We are actually one of the country’s in Europe where till the age of 16 the boys and girls drink the least amount of alcohol.

This makes me wonder how credible the news still is, because anyhow it will be the reflection of some people who are encountered with experiences and we as an public can never know the whole picture. Of course there has to be said that also the media cannot create a full image about what ever situation, but nowadays it seems that it is now about accurate information but just about speed. Who is there the first, even though they could mislead the general public? And what if the journalist are mislead on purpose?

In the end I cannot stop thinking how powerful the media is, how big parts of it is in the end just based on opinions anyway and how now it is evolving to create mass fear and hysteria so that in the end we would buy more and more in case of protection? Coming to think about it, this sounds like we are going after the American lifestyle.

Somehow that is the thing I do respect over here, that the encounters I had with Greek citizens they mostly respond relaxed. Wondering if it’s the climate or not, it is charming and nice that they treat each other more humane!